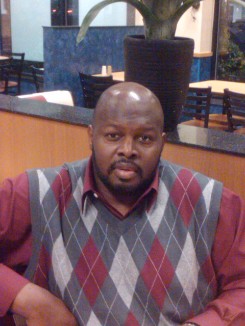 Imam A. Munir Mohammed is a native of Brooklyn, NY and has lived in the Carolinas since 1992.  He is currently the resident Imam at W. Deen Mohammed Islamic Center (Durham) and was elected in May 2009.  WDMIC is currently active with Durham Congregations in Action (DCIA), Habitat for Humanity and Urban Ministries in collaboration with Believers United for Progress (BUFP) and continues to seek participation with other organizations that serve the human public.

Munir has been a member of the Governor’s Religious Advisory Committee for DOC since 2003 and was recently selected to be Vice Chairman.  Munir served on the Interfaith Advisory Committee for Charlotte Mecklenburg Schools, Former Board Member of Mecklenburg Ministries, and worked with the United Religions Initiative – Charlotte Chapter and other religious groups to bring about peace and cooperation.  Is a frequent guest speaker on Cable Access TV Show Sacred Life Connections.  He is committed to being of service to humanity in every field of human endeavor.

Munir played Intercollegiate Varsity Basketball and served as Team Captain for 3 years.  He also was selected to the Eastern Coast Collegiate All-Conference Team 87 and 88.  While coaching at a Catholic H.S. and assisting Imam Fajri they lead the school to two consecutive N.Y. State Basketball Championships in two different divisions, the first time this was achieved in the State.  Munir currently serves as Assistant Coach for the Charlotte Nets 16’s, AAU Boys Basketball.

Imam Munir has lectured throughout the United States on various topics such as Managing Conflict, Creative Problem Solving, Human Relations and Correcting Perception in Religion.  Munir is also well known for his easy teaching methods of the Qur’anic Arabic Language and currently serves as Arabic Instructor for Masjid Malcolm Shabazz (Clara Mohammed Schools & Summer Camp) in Harlem NY and Randolph, Virginia, Charlotte, Greensboro and Durham, NC.  Imam Munir has authored several educational pamphlets on topics such as Ramadan & Its Etiquettes, Eid Celebrations, the Religion of Al-Islam and Athaan (Call to Prayer & Prayer Steps) all expressing the language and insights of Imam W.D. Mohammed.

Ultimately, Munir gives all the credit and praise to God.  He also credits his family’s undying support and encouragement from his leader Imam W.D. Mohammed as major ingredients for his success.  We pray that we truly “Honor His Legacy” with our works!